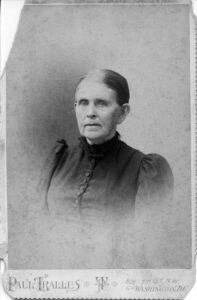 Paul Tralles was a professional photographer and took the photo of Catherine Hegarty Kane at his photo studio located at 808 7th St. N.W., Washington, D.C.

Paul Tralles had various locations for his photo studio. Below is an advertisement about his new photo studio location:

SPECIAL NOTICES
PAUL TRALLES, PHOTOGRAPHER, has removed to 808 7th st. n.w.; will be ready to receive his patrons about the 17th of this month.

He immigrated to the U.S. in 1853 and was naturalized a U.S. citizen on 09 January 1900 in Washington, District of Columbia.

He died on 07 December 1929 at Bonhomme, St. Louis County, Missouri at the home of his son.

He was buried on 10 December 1929 at Glenwood Cemetery, Washington, District of Columbia.

Below is his obituary:

Paul Tralles, father of Forest P. Tralles, St. Louis attorney, died yesterday at the home of his son on Denny road, St. Louis County, of the infirmities of age. He was 87 years old.

Besides Forest P. Tralles, he is survived by another son, George E. Tralles, a Denver attorney, and six grandchildren.

Mr. Tralles was born in Pennsylvania and moved to Washington, D. C., when a young man. He served in the Union Army for the duration of the civil war. He lived in Washington until eight years ago, when he came here to live with his son.

Services will be held Monday morning at 9 o’clock at the residence on Denny road and interment will be in Washington, D. C., Tuesday afternoon.